Multi-disciplinary artist, Carnivalist, DJ and Educator Linett Kamala has created a brand-new carnival themed mural outside Studio West Gallery, Notting Hill ahead of this summer’s long-awaited return of the event.
The mural shines a light on the largely unknown story of Rhaune Laslett (b.1919), a community activist and the principal organiser of the first Notting Hill Festival, which later evolved into the Notting Hill Carnival.

The mural will be on show throughout the August 2022 bank holiday weekend and beyond. Commissioned by Studio West Director Caroline Boseley, the mural has been created by Linett Kamala in collaboration with young creatives that Kamala mentors. The public artwork celebrates the last 50years of Notting Hill Carnival, honouring the beloved annual event which triumphantly returns this year after a three-year hiatus.

Linett Kamala comments, “I hope the mural will make more people aware of local activist Rhaune Laslett.  She had the vision to organise a small children’s street fayre back in the1960s to ease racial tensions which would later grow into what we now know as Notting Hill Carnival.  Her message of unity and community endures to this day” 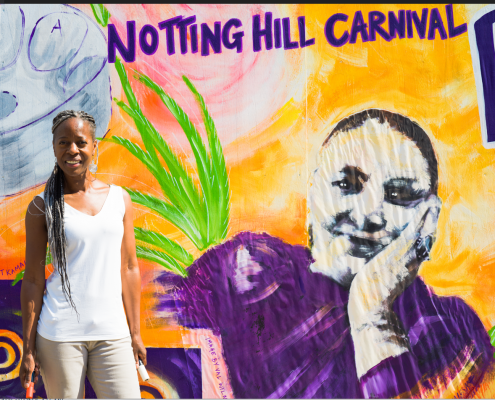